Now that it has brought its own coronavirus epidemic under control, China’s Communist government has shifted to what it does best: changing the narrative, pumping out propaganda, and fooling the masses.

State media now boasts that medical teams from the best hospitals across the country came to Wuhan and orchestrated a massive turnaround in fortunes. With almost gleeful headlines in the People’s Daily reporting that cases outside of China have now exceeded cases within China, and that China stands ready to send out its doctors to save the rest of the world, I believe it is necessary to remind the Chinese people, myself included, of a long forgotten part of Chinese history — the story of those who brought life-saving modern medicine to China and why we all owe gratitude to them in this age of pandemic.

In February 2020, at the peak of Wuhan’s misery, the hospital where whistleblower Dr. Li Wenliang worked was often the focus of many international media outlets.

However, only one journalist noticed that in front of the hospital there stands the lonely statue of a man named Eustachius Zanoli, the founder of the predecessor of what is now known as Wuhan Central Hospital.

It turns out that the hospital where Li Wenliang worked, and died, traces back to one founded by an Italian missionary, Eustachius Zanoli, in 1880; part of Wuhan’s colonial past. 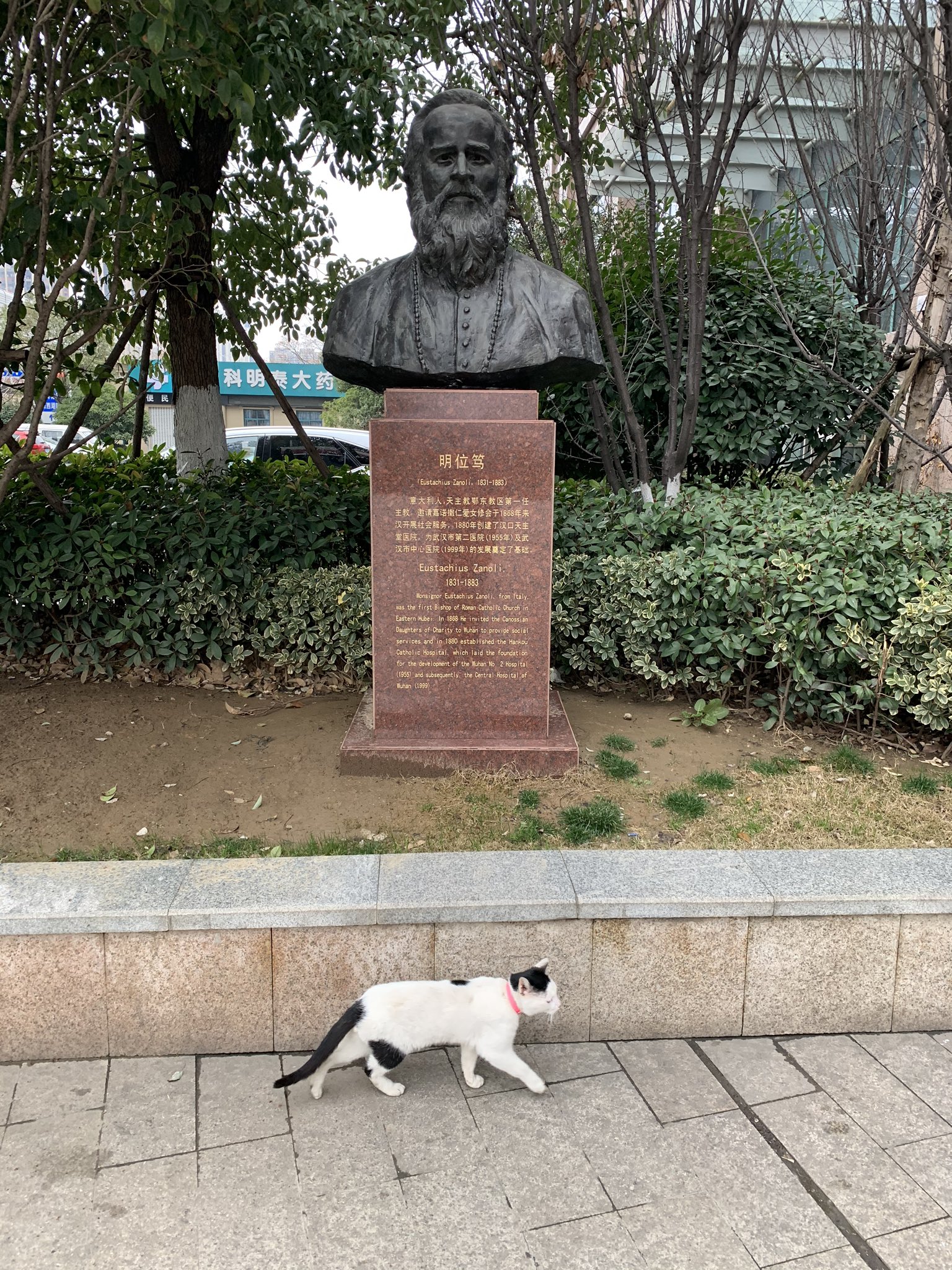 As Chris Buckley from the New York Times reported in his tweets, this reflects part of Wuhan’s colonial past when the city was known as the Chicago of the East. Concessions were ceded to the Western powers in the bustling inland port of Hankow, and Westerners flocked to the city to establish trade relations, explore China and compete amongst themselves for commercial gain in the late 1800s and early 1900s. However, the story of Eustachius Zanoli and Wuhan Central Hospital is part of a much bigger story — the great missionary age of China.

Following the Opium Wars, as Imperial China was forced to open up to Western powers eager for a slice of the massive Chinese market, a group of people with radically different intentions also arrived.

These people were Western missionaries, both Protestant and Catholic, who saw the opening up as a golden opportunity to come to China, preach the gospel and convert the East to Christ.

Bishop Zanoli was one of them. An Italian Franciscan, he came to Hubei Province in 1856. Five years later, he became the Vicar Apostolic for the Apostolic Vicariate of Hubei. As a missionary with strategic thinking, he made use of favourable terms established in the Peking Treaty of 1860 between Western powers and Imperial China to acquire a large plot of land in Hankow and build the biggest church of the Hubei vicariate in the British Concession, the St Joseph’s Cathedral of Hankow, which was completed in 1876.

Adjacent to the church, Zanoli built the first Catholic hospital in Wuhan in 1880 and invited the Italian Canossian Daughters of Charity to come and run the hospital. For decades, it was operated by the Catholic Church. When the Communist government took it over in 1955, it became known as the Wuhan Second Hospital.

Eventually in 1999, the Second Hospital split off to form the Wuhan Central Hospital. It was there that Dr. Li Wenliang discovered patients with severe pneumonia and became one of the first to alert the world regarding the outbreak.

But Catholics were not the only ones to leave a medical legacy in China. In fact, China’s first hospital in the modern sense was founded by the American medical missionary Peter Parker. The Canton Hospital, founded in what is now known as Guangzhou in 1835, became one of the world’s best ophthalmic institutes and remains China’s best-known ophthalmic institute to this day.

Missionaries were often disturbed by the lack of proper medical care for the majority of China’s populace. Protestants formed the Medical Missionary Society in China in 1838. By the end of the 19th century, China was the world’s leading medical missionary destination. There were more than a hundred missionary-run hospitals and they treated millions of patients.

For the next hundred years after Dr Peter Parker, Western missionaries established the first modern hospitals, medical schools, universities, nurseries, orphanages and mental asylums across China. When the Chinese government sent in its medical elite squad to Wuhan to quell the epidemic, perhaps only the more senior doctors realized that they had all been educated in medical schools founded by 19th Century missionaries.

In fact, everyone from Dr Sun Yat-sen, founder of the first Republic in Asia which toppled China’s last imperial dynasty, to the father of China’s current top epidemiologist Zhong Nanshan, were all educated by missionaries. Dr. Sun even practiced at the Canton Hospital before he discovered politics.

It is also very interesting that the best hospitals and medical schools in the country are Xiehe in the North, Xiangya in the South, Qilu to the East, and Huaxi to the West(北协和，南湘雅，东齐鲁，西华西)，all of them were founded, funded and operated by Protestant missionaries and their churches. All that ended, of course, with the Communist takeover in 1949.

Chinese state media often touts experts and doctors educated at these institutions as heroes in the fight against coronavirus, but conveniently it forgets to mention their Christian heritage.

“Xiehe”, or Peking Union Hospital and Medical College, was founded in 1906 by the London Missionary Society together with five other churches in Beijing. Xiangya in Changsha, Hunan Province, to the south, was founded by the Yale Mission in China, missionaries from Yale University who felt spurred on by the bloody anti-Christian Boxer Rebellion to come to China and proselytize.

Qilu, once known as Cheeloo University, was started by American and British missionaries who came together in 1909 to combine their respective Christian colleges to form one Christian university in the eastern province of Shandong, with the medical school there gaining prominence in later years.

Last but not least, Huaxi Hospital and Medical School in Chengdu, the best hospital in Southwestern China, is the legacy of the two hospitals established by the Missionary Society of the Methodist Church in Canada and the Methodist Episcopal Church in 1892.

There is one more significant link between the Wuhan outbreak and Western missionaries in the 1800s. The Wuhan Union Hospital, which is one of central China’s finest and largest, was one of the first hospitals affected by the outbreak and its doctors fought night and day to keep patients alive, often without adequate protection due to the initial government incompetence.

That hospital was founded by one of the best-known Protestant missionaries of all time, Griffith John of the London Missionary Society, who was a pioneer in translating the Bible into Chinese.

Eustachius Zanoli and Griffith John arrived in China within a year of each other. They probably never met due to their religious differences but both left an indelible mark in Wuhan. Zanoli died in Wuhan in 1883; Griffith John left the city in 1911 amidst revolutionary upheaval but always felt a deep connection with Wuhan.

Why is this relevant? Well, it is a great travesty that none of this important history is being taught in China. These missionaries dedicated their lives to China and the spiritual and physical well-being of the Chinese people. They were not greedy colonialists who sold opium and stole China’s riches. In fact, they vehemently opposed such vile practices, and started campaigns against smoking opium and backward customs like foot-binding.

Men and women like Griffith John, Eustachius Zanoli, Peter Parker and many more deserve to be mentioned in China’s history textbooks and commemorated by the Chinese people.

Instead, in the official histories the missionaries are described as accomplices of colonialism, agents of imperialism and foreign invaders. Their contributions to modern medicine and healthcare are completely overlooked. This is a prime example of how Chinese children are continuously taught a manipulated version of history and spoon-fed a toxic brew of Communism and nationalism – which are designed to incite hostility to Christianity and the West from children’s earliest years.

The propaganda machine continues to pump out conspiracy drivel and rejoices at the sufferings of the West. We should remind them of the missionaries who laid the groundwork for a modern medical and educational infrastructure that saved thousands and thousands of lives. They deserve an honourable place in China’s history.

Not all things and people that arrived in China after the Opium War of 1840 are evil. In fact, along with the missionaries, came China’s first universities, schools, hospitals, old age homes and orphanages. One can go as far as to say that the only greatly regrettable import from the West into China was the ideology of Marxism-Leninism, the fruits of which are now felt across the globe.

William Huang is an avid researcher into China and East Asia’s demographic crisis. He also aims to raise his voice for the sanctity of life wherever and whenever he can.